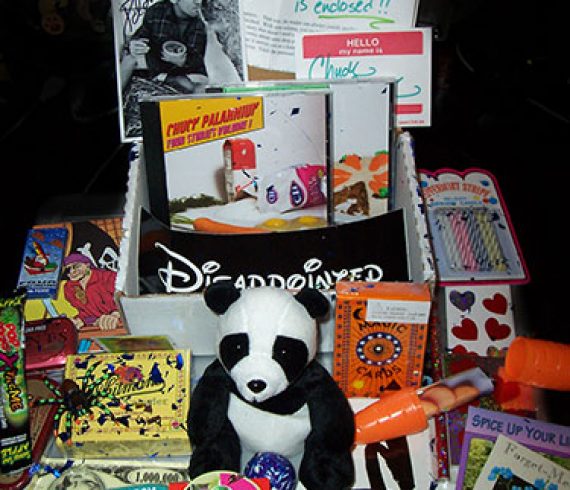 by cabridges· February 04, 2007· in Uncategorized· 0 comments tags: chuck palahniuk
Well, OK, it was consensual. I was asking for it. Last fall the author of “Fight Club,” “Survivor,” “Diary,” Choke, “Invisible Monsters,” and some truly bizarre short stories and essays opened up the floodgates by offering to respond to any mail sent him during the month of October. Previous recipients of this offer hinted darkly at what he sends out… Got my box yesterday, and I’m impressed. In no particular order, the box was crammed with: A tiny strawberry plant grow kit Packs of seeds for forget-me-nots, carrots (packaged in a plastic carrot), and an herb garden A small Whitman’s Sampler box A tin of Altoids and a tin of cinnamon mints An “It’s a Boy” blue bubble gum cigar A laminated million dollar bill A holographic picture of a tiger A superball A generic Swiss Army knife A temporary tattoo of a Chinese character A pack of magic cards Valentine stationary and pencil Some relighting birthday candles A small Pirate Coloring book, with Santa Claus crayons Watermelon Pop Rocks A bumper sticker written in the Disney font that says “Disappointed” A toy severed finger A “Hello, My Name Is” sticker signed “Chuck Palahniuk” An autographed picture of Chuck passing […] Read More

Want to hear from Chuck Palahniuk?

by cabridges· October 03, 2006· in Reading· 0 comments tags: authors, chuck palahniuk
Careful how you answer. The author of “Fight Club,” “Diary, “Survivor,” “Invisible Monsters,” and other twisted tomes can be described as many things, but boring is not one of them. You might want to stress test your mailbox first, but he’s announced that he’s taking fall and winter off to answer fan mail and if you get a letter to him in the month of October you’ll get a response. I leave it to you to decide if that’s a good thing. Read More