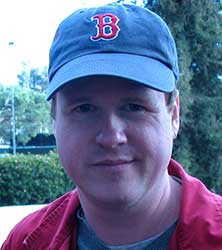 I was fortunate enough to do a phone interview with Joss Whedon for my newspaper last Friday on his new Internet musical miniseries “Dr. Horrible’s Sing-Along Blog.”

This is Chris Bridges with the Daytona Beach News-Journal, and I’m talking with Joss Whedon, creator of “Buffy the Vampire Slayer,” “Angel,” the show “Firefly,” the movie “Serenity,” the upcoming FOX show “Dollhouse,” and now an original online musical mini-series, “Dr. Horrible’s Sing-Along Blog.” Thank you for talking to me.

Thanks for having me.

Go ahead and give me the elevator pitch for “Dr. Horrible.”

I’ve never heard that phrase. Basically it’s your typical Internet musical about a super villain who’s trying to make his bones in the super villain community and get some respect, and maybe even work up the nerve to talk to the girl at the Laundromat.

Yeah, you know, I mean it’s a tired genre but I thought I could wring a few bucks out of it before it dies.

How did this get started? What made you decide to go straight to the Internet?

You know, there’s been a lot of talk about that during the (writers) strike, I’ve been interested in doing things that were smaller, lower budget, more filled with my friends, and sillier than I’m allowed to do in the normal course of Hollywood, so I decided I’d just fund a little something myself. It kind of ballooned, in terms of the amount of talent that we were able to attract, but it’s been true to its tiny roots of “Let’s just put on a show.”

A “my dad has a barn” sort of feeling.

How did you choose the cast? Does Nathan Fillion have pictures of you, or–

You know, you’re not the first person to ask that so I’m beginning to wonder. After I passed out, what happened…?

You know, who wouldn’t cast Nathan Fillion in absolutely everything. I mean, he can play the hero, he can play the idiot, he can play the ingénue, he can play the ficus and be the most interesting thing in the room. He’s amazing. And you know he’s a dear, smart, centered guy, so that’s a no-brainer. And he’s so great as that character, you know. It very much reflects some of his own humor that the moment he signed on Zack and I were writing a bunch of his scenes, we raced to our typewriters. No, we use computers, we’re not that old.

But you know, Neil was… I wasn’t as sure Neil would be interested in it and he said yes faster than I had the question out. But he’s, you know. Just incre.. I’ve seen him do everything, including, you know, sing on Broadway, so I knew he had the chops. He still brought more to it than I even imagined he could. And Felicia, you know, has been a friend since she was on “Buffy.” Her show “The Guild” has been kind of an inspiration for this and I suspected she had some singing pipes as well and she also blew me away. The first time she and Neil sang together, I may have cried a little.

Will there be a soundtrack?

Yes there will! Although I’m not positive when.

Making it up as we go along?

There is no truer statement of this entire endeavor than that.

Has it been more… I’m not sure “relaxing” is the right word, but has there been a different feel to it because you’re totally in control of everything?

Yeah, you know, “relaxing” is definitely not the right word? Because being in control of everything means being responsible for everything, including signing all the checks. You definitely learn, oh, this is really complicated. I understand why it’s so hard to settle contracts of studios and things. But… And I got very nervous, before we had line producers on, I just thought “This is never going to happen!” But the flip side, the creative side, yeah, it is like a warm bath. It’s just the sweetest, the most delightful, relaxing thing, just in terms of “This is just us, this is what we want to do with our time. Everybody is having the time of their lives.” That’s something that’s hard to capture.

What time will the episodes be posted?

We’re planning to post them pretty much at 12:01 in the morning.

Are you ready for the entire Internet to land on you?

You know, if we don’t crash it, we’ve failed.

No, we only have the bandwidth to support 17 viewers at a time.

No, none of those things are true, we do hope that a lot of people will show up, ‘cause we think it’s kind of an event. But we’re also prepared for the numbers to be even smaller than anybody thought, for everyone to go “awwww.” Because, you know, you have to be prepared for that and the great thing about it is I don’t have anybody worrying about it. We don’t have anybody we’re beholden to, to be like “You failed us! We loved the musical.” We think the people who see it will love it as well, and how many people see it, well, that’s not really up to us.

You have a knack for attracting obsessive fans. What do you think they see in your work?

This is an obsessive fan asking that.

Yes, I am one, too. That’s what I am, that’s what I grew up as. The things I love, I love very hard. And that’s the kind of… and it’s usually genre stuff, which also attracts that type. You know, the world of imagination; when people enter any world that’s not our own they’re working in a different way than if it’s just a straight drama, no matter how great. It could be the “West Wing,” it’s great but there’s a different level when you add an element of fantasy. Particularly when you add song. It allows people to lose themselves, and [in an exaggerated arch voice] “find themselves.”

Yes, I am a new-age calendar. But I’m not wrong.

Your fans are also the type to know the ins and outs of the Internet and how to grab videos before you’re ready for them to. Are you concerned about the likelihood of piracy?

They got the teaser before we were ready for it. You know, we sort of, the inevitability of some piracy is something we’re prepared for. We also know that true fans do tend to, you know, if something is, you know, available to buy and the buying of is part of being in the community because it supports the people who have created it, you know, i.e. letting us pay our crew, it’s, you know, you take the one with the other.

I mean, we’re giving this thing up for free on the Internet for a week because we want to give the fans something that they can just have. But we want to make it an event that goes away, so that it feels more special.

Has there been any reaction from studio execs that you still work with, about the kind of end run around the industry?

All the response from everybody involved with the studios has been positive. Has been interest in, do you want to develop this in another way, do you want to partner in this kind of distribution, there’s… nobody said (in crotchety old man voice) “Say, what are you kids doing?” and tried to chase us off like a cop in “The Little Rascals.” So—

Well, they’re also interested in seeing if it works so they can try it.

Yeah, I mean, nobody’s out to… this isn’t a zero-sum equation. Everybody can win here, you know, and if it wasn’t for some of those studio people I would never have been able to make this. Andrew Finneday, the Universal executive who let us have the lot for a song, for a day, you know, who are the people in the industry that I deal with, they’re people, they’re a part of the community. The guys at the very tippy-top that I pretty much never see, they have a different agenda but they also can see this as “Well, why don’t we let them jump in the pool and we can find out if it’s too cold that way?”

So, again nobody loses. Nobody’s cranky about this. That I know of. Maybe the Grinch, who doesn’t love Christmas at all, is up on his hill going, “Oh, the noise noise noise noise,” but I don’t know him.

If everything came true the way you wanted it to be, what would you like to see happen because of “Dr. Horrible”?