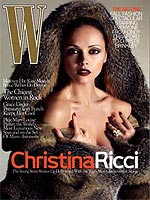 Soon after Christina Ricci appeared on the cover of W wrapped in reindeer fur (just in time to squeak onto PETA’s Worst Dressed List for 2006), the webmaster of her most popular fan site www.christinaricci.info took the whole thing offline to protest her animal-stomping ways.

“Well, that’s it,” he posted where previously there had been over 900 Ricci photos. “I’ve had this Christina Ricci fan page for almost 8 years (since januari 1999), but I recently found out Christina doesn’t appear to have a problem wearing fur. Well, I do. I also have a problem with people who wear fur. Conclusion: I have a problem with Christina. And now that problem is solved, because I don’t have a website about her anymore, so I no longer have anything to do with her.”

Initially her rep dismissed this — those whacky fans! — but the popularity of that page (second in most searches for “Christina Ricci”) made have had something to do with Ricci’s subsequent reversal. Ricci e-mailed PETA with an apology and a promise to do better, and they took her off the list.

Hooray for Christina’s new peer-pressured awareness, and let’s hope other famous clothes-wearers follow suit, as it were. Picking on defenseless yet fabulous animals is just not cool, apparently. But the stars need something expensive, trendy, and attention-getting to wear and I have the perfect suggestion: celebrity pelts.

I’m not saying we should declare open season on celebrities. Not at this junction. But why not let the annoying party-girl feuds progress out of the scandal rags and into the next level? I really don’t care if Britney threw a drink at Christina or Lindsey is not talking to HIllary. But it would make some serious headlines if Nicole stepped out of her limo flashing, among other things, an original Paris Hilton wrap — complete with hair and vacant eyes — and a smug smile. You know Jessica has fantasized about an authentic Nick Lachey skin for her living room floor, I say go for it. These are people who have spent hours a day and thousands of dollars to get perfect skin and lustrous hair, so it’s got to feel great. And, for the most part, the loss of your average C-list celebrity would have less of a negative impact on the world than the loss of, say, a few dozen rabbits or baby harp seals.

The only downside I can see is the potential market for cheap knockoffs. Celebrity impersonators would find themselves hunted to extinction for the Asian market, the number of magazine cover models would become dangerously low, and unscrupulous dealers would start celebrity factory farms where attractive, caged men and women were forced into cruel and heartless skin-care regimens.

And worst of all, PETA would have to start a new campaign.